Three quarters of white hypertensive patients have uncontrolled blood pressure (BP) despite being prescribed antihypertensive drugs. Plasma renin activity (PRA) is a biomarker that can predict BP response to antihypertensives. In this study, we aimed to identify metabolic signatures associated with PRA and their linkage with BP response to β-blockers and thiazides. Using data from 219 white participants enrolled in the Pharmacogenomics Evaluation of Antihypertensive Responses-2 (PEAR-2) trial, association between each of 856 metabolites and baseline PRA was assessed by multivariable linear regression adjusted for age, sex and baseline systolic BP (SBP). Metabolites with a false discovery rate (FDR)<0.05 and those with P<0.01 were tested for replication in 463 white hypertensives enrolled in PEAR. Replicated metabolites were then tested for validation based on directionality of association with BP response to β-blockers and thiazides in both PEAR studies. A total of 63 metabolites were associated with baseline PRA in PEAR-2, of which 9, including 6 lipids, were replicated in PEAR. Of those replicated, 3 were validated based on BP response. These included sphingosine-1-phosphate, that was associated with reduced hydrochlorothiazide SBP response (β=7.6±2.8, P=0.007) and diastolic BP response (β=4.1±1.7, P=0.018), caprate that was associated with greater metoprolol SBP response (β=-1.7±0.6, P=0.006) and 1-palmitoleoyl-GPC (16:1) that was associated with reduced hydrochlorothiazide SBP response (β=4.1±2.0, P=0.038). These metabolites clustered with other metabolites involved in sphingolipid, phospholipid, and purine metabolic pathways, highlighting these pathways as potential novel metabolic mechanisms underlying BP response. 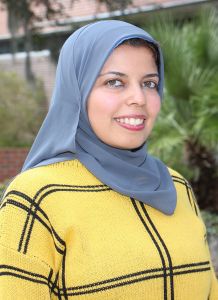 Mai Mehanna received her bachelor’s degree in pharmaceutical sciences in 2010 from Misr International University, Egypt. She worked as a clinical research associate at the Children’s Cancer Hospital from 2012 to 2015. Thereafter, she received a Fulbright scholarship to pursue her master’s degree in Pharmacotherapy and Translational Research which she earned in May 2017 from the University of Florida. There, she studied the field of pharmacogenomics and personalized medicine and her research work was focused on the role of plasma renin activity biomarker in personalizing the antihypertensive drug therapy. In May 2018, she received a graduate assistantship from the University of Florida to pursue her PhD in pharmacogenomics and precision medicine. Currently, she is studying the metabolomic and genomic underpinnings of the renin angiotensin-aldosterone system and blood pressure responses to antihypertensive drugs in European and African American hypertensive patients under the supervision of her mentor Dr. Rhonda Cooper-DeHoff.