The University of Florida College of Pharmacy conferred Pharm.D. degrees for 265 graduates of the class of 2021, May 15. Also joining the celebration were 53 graduates from the class of 2020 who missed out on their in-person commencement ceremony last spring due to the COVID-19 pandemic. 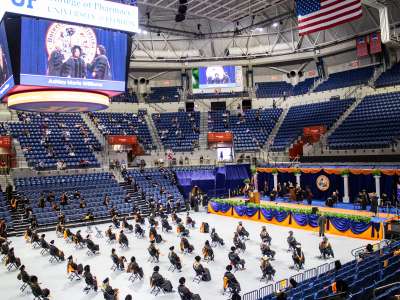 The ceremony at the Stephen C. O’Connell Center marked the first time the college has hosted an in-person graduation ceremony in two years. In her opening remarks, Dean and Distinguished Professor Julie Johnson, Pharm.D., applauded the hard work, perseverance and resilience of the graduates and commended volunteers from the college — including faculty, staff and students — who selflessly supported the nationwide effort to provide COVID-19 vaccines and make in-person events like commencement possible. She encouraged anyone who had not been vaccinated and who may have questions to turn to the 265 new Pharm.D. graduates for answers.

Gary Cacciatore, Pharm.D., J.D., vice president of regulatory affairs and associate regulatory counsel for Cardinal Health, Inc., served as the commencement speaker. Cacciatore received his Doctor of Pharmacy degree from the University of Florida in 1988 but has lived in Texas, where he received his law degree, for the past 30 years. He began his address by bringing “greetings from the great state of Texas,” which was met with hesitation but eventual applause. He introduced himself as being born, raised and having attended college in Florida, which the audience immediately applauded.

Cacciatore told graduates that the key to success is how they deal with obstacles. “When you face an obstacle, you can either let it define you, make it destroy you or let it strengthen you,” he said. Cacciatore commended graduates for overcoming the pandemic, while warning them that it would not be the last obstacle they would face. He went on to describe obstacles faced in his own life, including raising a son with cerebral palsy and learning to recognize that obstacle as an opportunity.

After the commencement address, Johnson recognized the Senior Class Representatives from each campus: Andrew Garcia, Gainesville; Jason Acevedo, Jacksonville; and Dalena Nguyen, Orlando. Johnson then announced three prestigious awards. Savine Hernandez and Michael Vincent received the David W. Ramsaur Award for being the highest academic performers in their class. Both earned a perfect 4.0 GPA during their four years in the program. The Perry A. Foote Award went to Eric Rubido for his distinguished scholarship, leadership and service.

Also recognized at the ceremony were the 60 spring Master of Science graduates. The college’s seven Ph.D. students receive their degrees at UF’s Doctoral Ceremony on April 29.