Hartmut Derendorf, Ph.D., an icon in the University of Florida College of Pharmacy and world-renowned expert in pharmacokinetics and pharmacometrics, passed away unexpectedly Nov. 23, at the age of 67.

Hartmut was among an elite group of faculty at UF to be awarded the title of distinguished professor. He joined the College of Pharmacy as a faculty member in 1983 and spent over three decades serving the college, including more than 25 years as chair of the department of pharmaceutics. 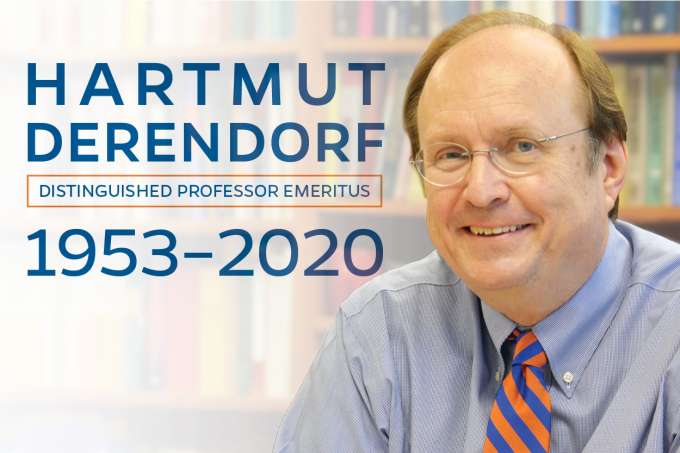 During his career, Hartmut mentored over 70 graduate students and 40 postdoctoral fellows, published over 500 publications and earned multiple national and international awards. His research interests included the pharmacokinetics and pharmacodynamics of corticosteroids, analgesics and antibiotics as well as drug interactions. He is considered one of the “fathers” of modern pharmacokinetics and pharmacometrics. In 2010, he was awarded the Volwiler Research Achievement Award from the American Association of Colleges of Pharmacy as well as the American College of Clinical Pharmacology, or ACCP, Distinguished Investigator Award — the highest research awards presented by both organizations. He was a fellow of ACCP and the American Association of Pharmaceutical Sciences and a former review panel member of the NASA Human Research Program.

Hartmut cherished his role as teacher and mentor. Many of his former students have enjoyed successful professional careers, including two former postdoctoral fellows who have become university presidents. In 2015, he earned the ACCP Mentorship Award and three years later was presented the 2018 American Society of Clinical Pharmacology and Therapeutics Mentorship Award. Hartmut is one of only two professors at UF to twice receive the UF Doctoral Dissertation Advisory/Mentor Award (2008-09 and 2017-18).

“Hartmut’s greatest impact on the pharmaceutical sciences may be best measured by the hundreds of lives he touched as a teacher, mentor, colleague and friend,” said Julie Johnson, Pharm.D., dean and distinguished professor of the UF College of Pharmacy. “He was one of our most respected and beloved faculty members, and his sudden passing is a tremendous loss for our college and the scientific community worldwide. The outpouring of sadness we have received, from current and former members of the college’s family, and from the clinical pharmacology community at large, highlights the profound impact Hartmut has had on so many lives.”

A native of Germany, Hartmut received his B.S. and Ph.D. in pharmacy from the University of Münster and then joined UF as a postdoctoral fellow in 1981. He expected to stay in Gainesville two years, but he fell in love with UF and met the love of his life, his wife, Kerry, ’82. She was pursuing her own Ph.D. in pharmaceutical sciences. They raised two sons, Kevin, BSME ’08, (Ph.D. from Washington University in St. Louis) and Karsten, MACC ’13, who also went on to graduate from the University of Florida. Hartmut would proudly refer to them as “a Gator family.”

In 2015, Hartmut was named the UF Alumni Association’s 18th Distinguished Alumni Professor. He was only the second UF College of Pharmacy professor to receive the prestigious honor. In his three years in the role, Hartmut traveled the country serving as an ambassador of the university’s academic and research achievements.

Hartmut loved to travel and gave more than 900 national and international presentations during his career. He was instrumental in establishing the Global Gators Symposium in 1997, which continues today. The biennial meeting takes place in Europe and showcases the international Gator spirit in clinical pharmacy and pharmacology by bringing together faculty, alumni and friends of the UF College of Pharmacy.

“Harmut’s impact reached far beyond Gainesville, and his legacy affected nearly every corner of the world,” said Thomas Schmittgen, Ph.D., a professor and chair of the department of pharmaceutics in the UF College of Pharmacy. “We will remember Hartmut’s gentle disposition, warm heart and his strong intellect. He touched countless lives, especially his many students and trainees.”

The UF College of Pharmacy joins his wife Kerry, sons Kevin and Karsten, daughters-in-law Candice and Amanda, and his beloved granddaughter, Miller, in grieving the loss of this truly amazing person. Hartmut’s network was enormous and we wish to provide a mechanism for those he touched to share their feelings. If you would like to share condolences and/or a note about the way that Hartmut touched your life, please complete the tribute form below.

Plans for a memorial service will be made after COVID-19 public health safety issues are no longer a concern. In lieu of flowers, contributions can be made to one of two organizations that Hartmut cared deeply about, the University of Florida College of Pharmacy and/or the Gainesville Orchestra.