The University of Florida College of Pharmacy received a record $28.3 million in research awards in 2019, which moved the college higher in the American Association of Colleges of Pharmacy, or AACP, research rankings released June 9. 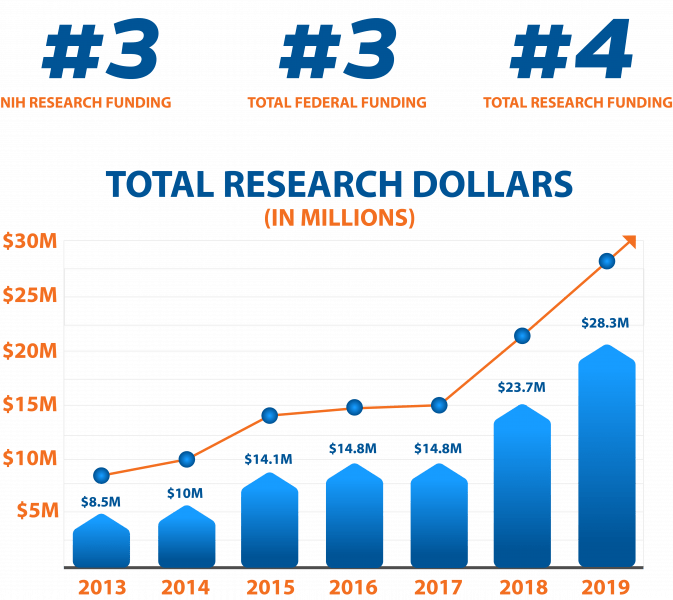 AACP’s annual research report compiles research data from more than 140 colleges of pharmacy around the country. UF placed No. 3 nationally in NIH funding ($23.1 million) and total federal funding ($24.3 million), and No. 4 in total funding ($28.3 million). In all three areas, the college saw substantial funding increases over the previous year.

“Setting a new record in annual research funding is a testament to the visionary research faculty in the UF College of Pharmacy who are determined to improve the health of Floridians and the world through their scientific discoveries,” said Julie Johnson, Pharm.D., dean and distinguished professor. “With the support of their research teams and staff, our research faculty have earned the confidence of funding agencies and demonstrated their promising research proposals are worthy of investment. We are excited in the coming years to witness the impact resulting from these research awards.”

The college’s $28.3 million in research awards tops the $23.7 million earned in 2018. That year UF ranked No. 4 among colleges of pharmacy in NIH and total funding and No. 5 in federal funding.

Faculty research in the college is highly collaborative and interdisciplinary, spanning across the entire life cycle of a drug — from drug discovery and development to precision medicine and post-marketing drug safety studies. The depth and breadth of research is evident by the 48 faculty members who secured funding as principal investigators or co-principle investigators on extramural grants during AACP’s reporting period from October 2018 to September 2019.

The UF College of Pharmacy’s rise up the national research rankings coincides with the university’s “preeminent” designation in 2013 by the Florida State Legislature and government leaders. Support from UF and the state legislature has helped the college recruit talented scientists to join its outstanding faculty and expand its research footprint in funding and projects.

“In 2013, the College of Pharmacy received $8.5 million in annual research funding and ranked No. 18 in NIH funding and No. 16 in total funding nationally,” Johnson said. “We can point to UF’s Preeminence Initiative as the beginning of our trajectory toward the top of national research rankings, and it’s remarkable how far we have climbed in only seven years. We are grateful for the investment the university made in the UF College of Pharmacy, which has helped propel our research program to these new heights.”

Moving up AACP’s research rankings adds to an impressive collection of achievements earned by the UF College of Pharmacy in 2020. In March, the college moved into the Top 5 of the U.S. News & World Report rankings for the first time, and in April, UF led the nation in pharmacy residency placements for the fifth consecutive year.