The American Society for Clinical Pharmacology and Therapeutics, or ASCPT, has named three early career scientists with ties to the University of Florida College of Pharmacy as inaugural editors-in-training for its journals. 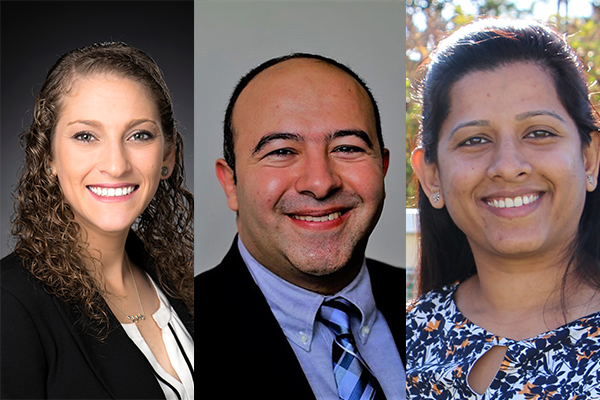 Emily Cicali, Pharm.D., a clinical assistant professor in the UF College of Pharmacy and Mohamed Shahin, Ph.D., M.S., a manager of clinical pharmacology at Pfizer and double Gator graduate, were named editors-in-training for ASCPT’s flagship journal Clinical Pharmacology and Therapeutics, or CPT. Sonal Singh, Ph.D., a postdoctoral research associate in the UF College of Pharmacy, was named an editor-in-training for ASCPT’s open-access journal Clinical and Translational Science, or CTS.

The one-year position provides an opportunity for these early career scientists to learn about the editorial process for a top-tier, peer-reviewed journal. As editors-in-training, the trio will be part of ASCPT’s core editorial team. They will participate in the manuscript consideration process, including peer review and decision making. In addition, they will assist with strategic planning for the journal and develop a social media strategy to encourage early career scientists to engage with CPT and CTS.

Cicali has been a member of ASCPT since 2015. Before joining the college as a clinical assistant professor, she completed a postdoctoral fellowship in pharmacogenomics at UF from 2017-18. Shahin joined ASCPT in 2012 and has earned six ASCPT Presidential Trainee Awards and was honored with the 2015 David Goldstein Trainee Award for his top scoring abstract. From 2011-18, he served several research roles at the University of Florida College of Pharmacy and earned his doctorate degree in 2015 and a master’s degree in biomedical informatics in 2018. Singh became a member of ASCPT in 2017. She has won three Presidential Trainee Awards and was named the 2018 David Goldstein Trainee Award winner.

About ASCPT
ASCPT is the leading forum for the discussion, development, and integration of clinical pharmacology, translational medicine, and therapeutics. A pillar of the scientific community for more than 100 years, ASCPT is committed to advancing the study and practice of translational medicine.