University of Florida College of Pharmacy research funding reached a record $23.7 million in 2018, moving the college into the Top 5 of the national pharmacy college research rankings.

The American Association of Colleges of Pharmacy, or AACP, released its annual research report May 8, and the UF College of Pharmacy made substantial moves up the national rankings for total grant funding and NIH funding. The college placed No. 4 nationally in both total funding ($23.7 million) and NIH funding ($16.5 million). In a third category measured by AACP, the college ranked No. 5 nationally in total federal funding ($19.3 million).

“UF has always been recognized for having one of the nation’s top pharmacy research programs, and the 2018 rankings affirm we are among the elite pharmacy colleges in the nation,” said Julie Johnson, Pharm.D., dean and distinguished professor in the UF College of Pharmacy. “Being ranked No. 4 for total and NIH funding is a testament to our amazing faculty and their research teams who are dedicated to solving some of the world’s biggest health challenges through scientific discoveries.”

Faculty research in the college is highly collaborative and interdisciplinary spanning across the entire life cycle of a drug — from drug discovery and development to precision medicine and post-marketing drug safety studies. The depth and breadth of research programs is evident by the 45 faculty members who secured funding as principal investigators or co-investigators during AACP’s reporting period from October 2017 to September 2018.

Dean Julie Johnson attributes the record research growth to the culture of excellence among faculty in the college and the recruitment of some of the nation’s top pharmacy researchers in recent years who added to an outstanding base of productive faculty. Since 2013, the full-time faculty in the college has increased from 72 to 115, with the new faculty filling clinical and research roles.

“With support from the University of Florida, the state legislature and strategic partnerships within UF Health, we have embarked on an aggressive campaign to recruit some of the brightest minds in pharmacy and science to add to our team of outstanding faculty,” Johnson said. “AACP’s new research rankings reflect the talented scientists we have at UF and their ambitions to improve human health through research.” 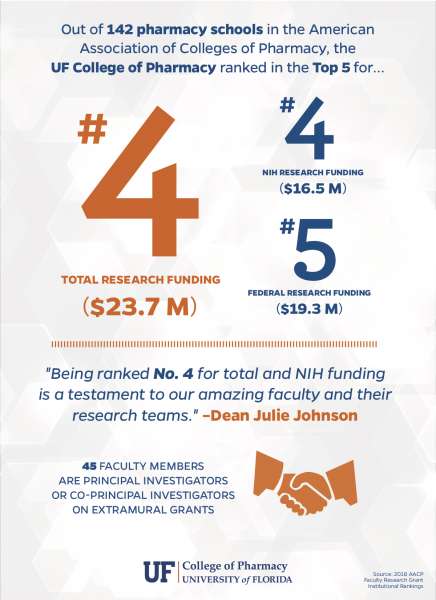