University of Florida College of Pharmacy students won multiple awards, including a national chapter of the year recognition, at the American Pharmacists Association Annual Meeting & Exposition in Seattle, March 22–25. More than 50 Pharm.D. students and several faculty traveled across the country to represent UF at one of the nation’s largest pharmacy meetings. 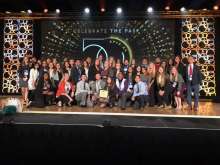 Division A – Chapter of the Year

The UF College of Pharmacy’s American Pharmacists Association-Academy of Student Pharmacists, or APhA-ASP, chapter received a national recognition, taking home the 2017-18 APhA-ASP Chapter of the Year Award for Division A. The award recognized UF for its superior programming, which envisioned the future of pharmacy by creating opportunities for student participation. Division A features around 40 of the largest pharmacy colleges in the country based on enrollment.

The college reclaimed its title as the “Back the PAC” winner this year. Having raised the most funds six years in a row for APhA’s political action committee that advocates for the pharmacy profession, UF lost the title last year, only to come back strong by raising nearly $8,000 this year, or a quarter of the total amount raised nationwide. Students at the Orlando campus rallied support by producing a rap video to promote the fundraising challenge. 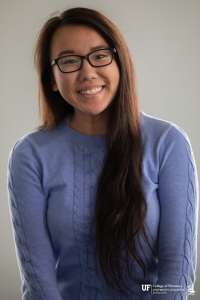 The Student Leadership Award recognizes outstanding academic achievement and leadership ability in APhA-ASP at the local, regional and national levels. The award is endowed by Procter & Gamble and presented to four students annually. Nguyen received the $500 scholarship and plaque at the annual meeting’s award ceremony. “I am humbled to receive the APhA-ASP Student Leadership Award,” Nguyen said. “I only hope to pay it forward and utilize all my experiences to provide guidance and support to future generations of leaders.” 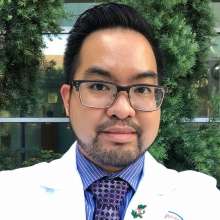 Ian Floresta, a third-year pharmacy student at the Gainesville campus, was appointed as a member of the National APhA-ASP Policy Standing Committee. As a committee member, his primary responsibility is to inspire pharmacy students across the nation to advocate for the profession’s future. “Being appointed to this position was a pivotal accomplishment as a pharmacy student, but there’s still a lot of work to be done on my part before I am satisfied,” Floresta said. “My appointment to the National Policy Standing Committee is just the beginning of a journey that I’m ecstatic to take part in.”

Additionally, the college won second runner-up in the nation for its Operation Diabetes Patient Care Project and the Region 3 award for its Operation HEART Patient Care Project. “The awards provided an amazing feeling, and it was a great moment to accept them amongst our colleagues,” said Elias Nazario, a second-year Pharm.D. student at the Orlando campus and UF’s 2019 coordinator for the event. “The passion and enthusiasm that UF students showed at this event will serve our chapter and college well in the years to come.”