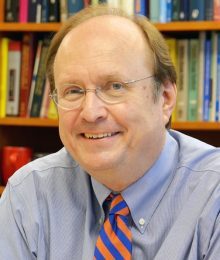 The American Society for Clinical Pharmacology and Therapeutics, or ASCPT, named Hartmut Derendorf, Ph.D., as the recipient of the organization’s 2018 Mentor Award. He received the award on March 22 at the opening session of the 2018 ASCPT Annual Meeting in Orlando.

As the V. Ravi Chandran Professor of Pharmaceutical Sciences and a distinguished professor and chair of the department of pharmaceutics in the University of Florida College of Pharmacy, Derendorf has overseen the training of more than 50 doctoral students during his 35-year career at UF. The ASCPT Mentor Award adds to his collection of teaching and mentoring honors that include UF’s Teaching Improvement Award in 1995, the International Educator of the Year Award from 2004-07 and the UF Doctoral Advisor/Mentoring Award in 2009 and 2018, among many other accolades.

“During my career, I have been blessed with outstanding students and postdocs, and seeing them grow and be successful is the greatest achievement one can hope for in academia,” Derendorf said. “It is a privilege to work with these wonderful young scientists and help ensure that clinical pharmacology maintains a strong pipeline of well-educated and highly motivated researchers for academia, industry and regulatory agencies.”

Derendorf’s research focuses on finding the right dose for drugs in development, particularly corticosteroids, analgesics and antibiotics, as well as optimizing dosage and minimizing interactions for established medicines.

Derendorf has published more than 10 textbooks in English and German and more than 450 peer-reviewed papers.