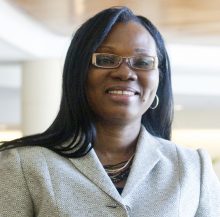 INSIGHT Into Diversity magazine, the largest and oldest diversity and inclusion publication in higher education, has awarded Folakemi Odedina, Ph.D., a professor of pharmacotherapy and translational research, with a 2016 Inspiring Women in STEM Award. The award honors women who work to make a difference in the fields of science, technology, engineering and mathematics, or STEM. Odedina will be featured, along with 65 other recipients, in the September 2016 issue of INSIGHT Into Diversity magazine.

“Dr. Odedina has inspired women and underrepresented minorities to chase their career goals and find success in the STEM fields,” said Julie Johnson, Pharm.D., dean and distinguished professor at the UF College of Pharmacy. “She is a tremendous role model and has shown how a minority female can be successful in balancing her scientific career and family. All of us at the UF College of Pharmacy congratulate her on receiving a 2016 Inspiring Women in STEM Award.”

Inspiring Women in STEM Award recipients were nominated by a colleague and selected by INSIGHT Into Diversity based on their efforts to inspire and encourage a new generation of young women to consider careers in STEM through mentoring, teaching, research and successful programs and initiatives. While many women who work in these fields have made significant contributions and have engaged in new discoveries and innovations, they are not always recognized for their hard work and dedication.