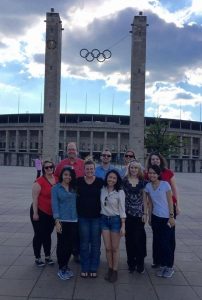 Nine students from the University of Florida College of Pharmacy share a new perspective of the world of pharmacy today following a two-week study abroad trip to Germany. Led by Hartmut Derendorf, Ph.D., a distinguished professor of pharmaceutics and chair of the department of pharmaceutics, and Karen Whalen, Pharm.D., assistant dean for clinical education, the trip included visits to Berlin, Münster, Düsseldorf and Munich to meet with faculty and students studying at German colleges of pharmacy. In addition, the UF delegation visited the Federal Pharmacy Association in Berlin and met with several German pharmacy governing bodies during the May visit.

The trip afforded UF pharmacy students from Gainesville and the distance campuses to travel together and share their perspective of American pharmacy with their German peers. The UF group gave five presentations and enjoyed several social events with German pharmacy students.

“Visiting Germany allowed us to see the many stark differences in the way that pharmacy education and practice exists in the two countries,” said Sarah Legg, a rising third-year pharmacy student from the St. Petersburg campus. “The trip benefitted me in so many ways academically and in understanding the culture and pharmacy profession in Germany.”

Mirjam Trame, Pharm.D., Ph.D., an assistant professor of pharmaceutics, also hosted the UF delegation in her hometown of Rheine. She coordinated a tour of her family’s pharmacy and a local pharmacy museum. The group also met the mayor of Rheine and was featured in the city’s local newspaper.

“The day we spent in Rheine with Dr. Trame’s family pharmacy was very rewarding because it helped us to understand the business and legal aspects of operating a German pharmacy,” said Lea Gaber, a rising third-year pharmacy student from the St. Petersburg campus. “This trip has completely changed my view of global pharmacy, and I now realize that we have so much to learn from one another.”

The Germany trip is one of the newest offerings for short study abroad travel from the College of Pharmacy. Similar travel opportunities exist to Ireland and the United Kingdom, Scandinavia, and Malta and Italy.

To view photos from the trip, visit: https://ufcollegeofpharmacy.smugmug.com/Study-Abroad-Trip-to-Germany/n-t97j5X.