The University of Florida College of Pharmacy celebrated more than 400 graduates from the class of 2016 during commencement ceremonies April 28 through May 2.

Students in the college’s professional Pharm.D. programs donned their cap and gowns and walked across the stage to be hooded at the Phillips Center for the Performing Arts on May 2. Surrounded by family and friends, the graduates enjoyed public recognition for their academic accomplishments at the University of Florida.

The event featured remarks by David Guzick, M.D., Ph.D., senior vice president of health affairs and president of UF Health, who reminded graduates that they are about to embark on an extremely fulfilling career and will be building many relationships with colleagues and patients. In addition, several awards were presented to faculty and students, including the Outstanding Pharmacy Alumnus Award, which was given to Michael McKenzie, Ph.D., an associate dean of student affairs at the College of Pharmacy.

During his address to students, McKenzie encouraged graduates to balance their passion for the pharmacy profession with their devotion to family and their community. He spoke of the importance that passion and grace have in the life of a pharmacist.

Each of the college’s four campuses had a representative from the senior class address the audience. The class of 2016 also presented a check to College of Pharmacy Dean Julie Johnson in the amount of $37,750. The pledged donation was part of the 4PD Giving Challenge and will support student professional development and travel. 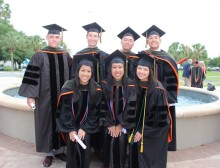 The ceremony concluded with the administration of the pharmacy oath, the singing of the alma mater and closing remarks from Dean Johnson.

“You have accomplished great things in getting to this day, but we look forward to all the things you will do to advance the pharmacy profession,” Johnson said to graduates.

College of Pharmacy students receiving a Doctorate of Philosophy in the Pharmaceutical Sciences degree were honored during the Advanced Doctoral Degree Commencement Ceremony on April 28. A Master of Science in Pharmacy degree was awarded to students in residential and online programs during the university commencement ceremony on May 1.

To view photos from the Pharm.D. commencement ceremonies, visit: https://ufcollegeofpharmacy.smugmug.com/Commencement-2016.