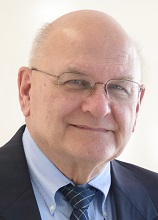 In his final semester at the University of Florida College of Pharmacy before retiring, Michael McKenzie, Ph.D., a professor and associate dean of student affairs, has collected two celebrated awards for his mentoring and teaching of students.

The UF Honors Program named McKenzie as its Honors Professor of the Year for 2015-16. In addition, he was nominated by students and selected by the college’s Awards Committee as the Faculty Advisor of the Year.

Since 1990, McKenzie has taught an honors-level course called “In Search of Magic Bullets,” to UF undergraduates interested in a pre-medicine, pre-pharmacy or another science-related field. The course provides students with an overview of drug research by selected pharmacy faculty and a better understanding about the efficacy and adverse reactions associated with treatment of diseases with medications. Each class includes about 20 students and encourages engagement and discussion as well as guest lectures from pharmacy professors and clinicians.

“UF honors students are among the brightest students on the UF campus, and it has been a privilege for me to be involved with their education,” McKenzie said. “In Search of Magic Bullets was developed as a way for students to have a better grasp of the pharmacy profession and generate interest in them attending the UF College of Pharmacy. The course has accomplished those goals over the years.”

McKenzie has played an instrumental role in advising hundreds of UF College of Pharmacy students during his 44-year tenure at the college. He has led the college’s Office of Student Affairs since 1984 and plans to retire in June.