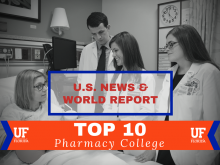 The University of Florida College of Pharmacy continued its rise to the top of the U.S. News and World Report’s national rankings.

UF moved to No. 9 nationally among 125 pharmacy colleges and doctor of pharmacy programs included in the rankings released on March 16. The top 10 position reflected a move up from No. 14 in 2012, the last year that U.S. News and World Report ranked pharmacy colleges.

In addition to placing in the top 10 nationally, UF continued to maintain its No. 1 ranking among pharmacy colleges in Florida.

“In recent years, we have made aggressive moves to advance the quality of our doctor of pharmacy education program and raise the impact of research done by our faculty,” said Julie Johnson, Pharm.D., dean and distinguished professor at the UF College of Pharmacy. “These moves have included substantial revisions to our curriculum and the addition of more than 20 new faculty members. The U.S. News and World Report rankings reflect that the excellence of our program is recognized nationally.”

The College of Pharmacy’s rise in the rankings can be attributed to curricular revisions making UF a leader in contemporary educational approaches, many national awards garnered by UF students and an increased focus and success in research. In addition, UF is a national and international leader in several areas, including pharmacogenomics, medication therapy management and pharmacometrics. The College of Pharmacy continues to benefit from strong support from alumni and friends.

The rankings were determined by assessment surveys sent to pharmacy school deans as well as the pharmacy science and pharmacy practice department chairs at programs accredited by the Accreditation Council for Pharmacy Education.