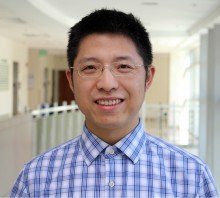 Yousong Ding, Ph.D., an assistant professor of medicinal chemistry, was one of 56 scientists and engineers selected to receive a grant award from the Air Force Office of Scientific Research, or AFOSR. The three-year award amounts to $360,000 and will allow Ding to develop an unprecedented cell-based strategy for the manufacturing of nitroaromatics, an important family of industrial chemicals that have a broad range of public and military uses. Industrial nitration is notorious for its heavily polluting processes, and Ding’s research will have the potential to revolutionize the nitration chemical industry by facilitating earth-benign production of nitroaromatics.

AFOSR awarded approximately $20.6 million in grants to researchers at 41 institutions and small businesses who submitted winning research proposals through the Air Force’s Young Investigator Research Program. The competition is open to scientists and engineers at research institutions across the United States who received a Ph.D. or equivalent degree in the last five years and show exceptional ability and promise for conducting basic research.