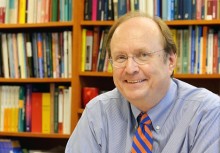 The University of Florida Alumni Association has selected Hartmut Derendorf, Ph.D., a distinguished professor of pharmaceutics, as its 18th Distinguished Alumni Professor.

Derendorf arrived at the University of Florida from Germany in 1981 with the intention of staying for just two years. Thirty-four years later, Derendorf’s affinity for the Gator Nation and its unique spirit has only grown. He represents that spirit and the University of Florida proudly in his travels around the globe as Distinguished Professor, V. Ravi Chandran Professor of Pharmaceutical Sciences and Chairman of the Department of Pharmaceutics at the UF College of Pharmacy.

He received UF’s Teaching Improvement Award in 1995 and the HHMI Distinguished Mentorship Award in 2008. His other awards include the UF Research Foundation Professorship in 2002, the CVS Pharmacy Endowed Professorship from 2007 to 2013, the International Educator of the Year Award from 2004 to 2007, and the UF Doctoral Advisor/Mentoring Award in 2009. During his tenure at UF, he has supervised more than 50 Ph.D. students.

Internationally, Derendorf’s leadership in the fields of biopharmaceutics, pharmacokinetics and pharmacodynamics has resulted in numerous awards and leadership positions. He has served as President of the American College of Clinical Pharmacology, or ACCP, from 2006 to 2008 and President of ISAP (International Society of Antiinfective Pharmacology) from 2004 to 2006. He won the McKeen-Cattell Award for the best publication in J. Clin. Pharmacology in 1994 and the Faculty Award of the University of Utrecht in 2005. In 2003, he was awarded the Nathaniel T. Kwit Distinguished Service Award of ACCP and the Research Achievement Award in Clinical Science of the American Association of Pharmaceutical Sciences, or AAPS. He is a Fellow of AAPS and ACCP as well as a former review panel member of the NASA Human Research Program. In 2010, he was awarded the Volwiler Award of the American Association of Colleges of Pharmacy, or AACP, as well as the ACCP Distinguished Investigator Award, the highest research awards of both organizations. In 2013, he was awarded the First Leadership Award of the International Society of Pharmacometrics. In 2015 he received the Merit Medal of the Westphalian Chamber of Pharmacy as well as the ACCP Mentorship Award.

As impressive as these accolades are, the DAP Selection Committee was even more touched by Derendorf’s personal connections and dedication to UF. He met his wife, Kerry Estes, Ph.D. ’82, during his post-doc years as she pursued her own Ph.D. in pharmaceutical sciences. In fact, Derendorf says that when he arrived in Gainesville, he fell in love twice – once with the University of Florida and, more importantly, with his wife. They married and raised two sons, Kevin, BSME ’08, and Karsten, MACC ’13, who also went on to graduate from the University of Florida. Derendorf proudly refers to them as “a Gator family.”

Learn more about Derendorf and why he is excited to be the UFAA’s 18th Distinguished Alumni Professor as well as his Gator story, goals and research in the video below: